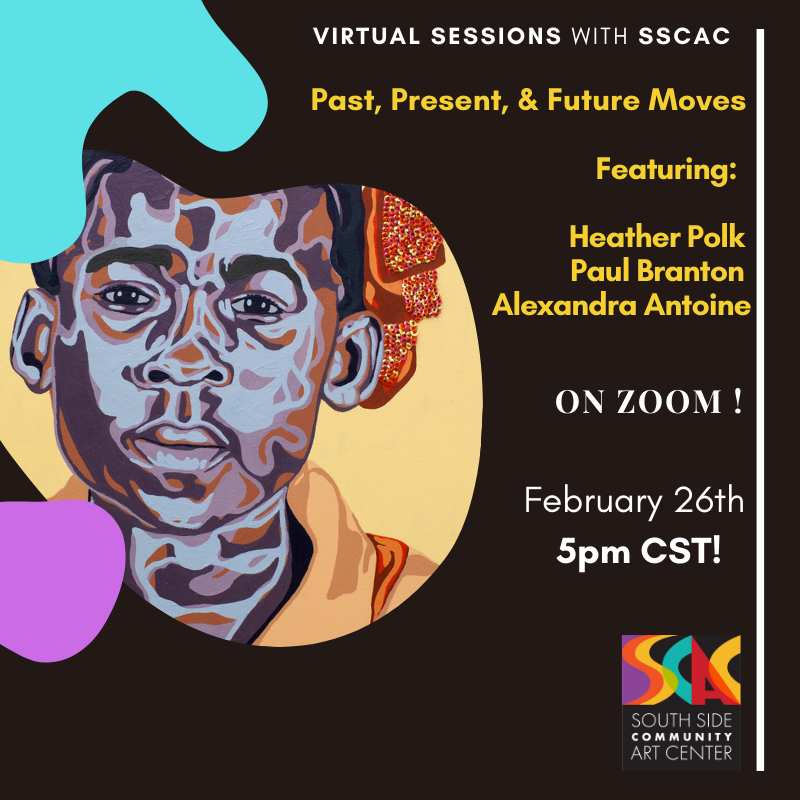 Alexandra Antoine, Paul Branton, and Heather Polk work through collage and mixed media practices in reference to social and political commentaries, the intimacies of Black life, and cultural identity.

As concepts of the past, present, and future overlap within their practice, they will discuss their individual concerns as artists, what pushes their work forward, and how art encourages us to look back to our past, while looking ahead. 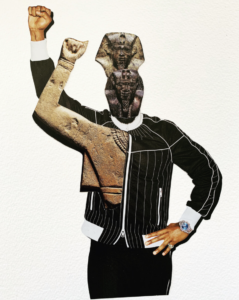 Heather Polk is a sales and marketing professional with an active art practice that fills her nights and weekends. She resides in Chicago where she relocated from Atlanta almost 10 years ago.

She is working toward establishing a small art studio that will deliver programming for sufferers of chronic disease so that they, and their caretakers, may utilize the empowerment of artistic creativity as a vital part of their disease management. Her art practice is centered around collage and abstract painting. 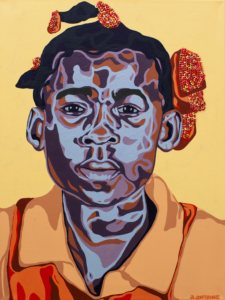 Alexandra Antoine is an interdisciplinary artist based in Chicago, IL. Her work examines traditional artistic practices throughout the African Diaspora with a focus on healing traditions, identity and culture through the use of collage, portraiture, and most recently, farming. She uses the portrait as a tool to re/present individuals of the African diaspora while exploring her relationship to them within the larger narrative of her Haitian identity.

She holds a Bachelor in Fine Arts and Arts Education from the School of the Art Institute of Chicago. Her work has been exhibited at Rootwork Gallery, Hyde Park Art Center, Roman Susan Gallery, Chicago Art Department and Stony Island Arts Bank in Chicago, IL and is part of the Arts in Embassies program in the U.S. Embassy in Port-au-Prince, Haiti. 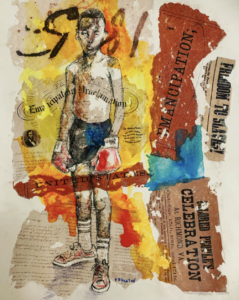 Paul Branton was born in 1973 in Chicago. He was influenced at an early age by the sights & sounds of the South Side’s urban environment. Writing short stories & putting on plays with his sister quickly became a passion and a means of expressing himself. It was this passion that guided his education, which ultimately guided his career.

Choosing visual art as his main focus, he entered Millikin University in Decatur, Illinois, majoring in Commercial Art with a strong emphasis in painting. It was at Millikin where he also discovered a love for poetry, a strong desire for painting, eventually putting on a one-man art exhibit displaying his works. During these same years, he also helped his college buddy Skee Skinner with several student film projects, opening up another doorway from which to express himself. Not only taking on writing & production credits, Paul spent much of his time on both sides of the camera playing supporting and lead roles.

He combined the two art forms by creating a series of paintings for the feature film Pieces of a Dream, in which he also portrayed a main character. Also merging visual art and poetry, Paul put together the upcoming coffee table book To Dream In Colour.