In the late 1930s, a group of Chicago-based Black American artists who were members of the Arts Craft Guild were instrumental in the founding of the South Side Community Art Center. They organized themselves to discuss funding efforts for the soon-to-be center. This meeting included founders Dr. Margaret Taylor-Burroughs, Eldzier Cortor, Bernard Goss, Charles White, William Carter, Joseph Kersey, and Archibald Motley.

This page is dedicated to their legacy, which SSCAC strives to uphold each day through our work to preserve, promote and progress Black artists and their work. 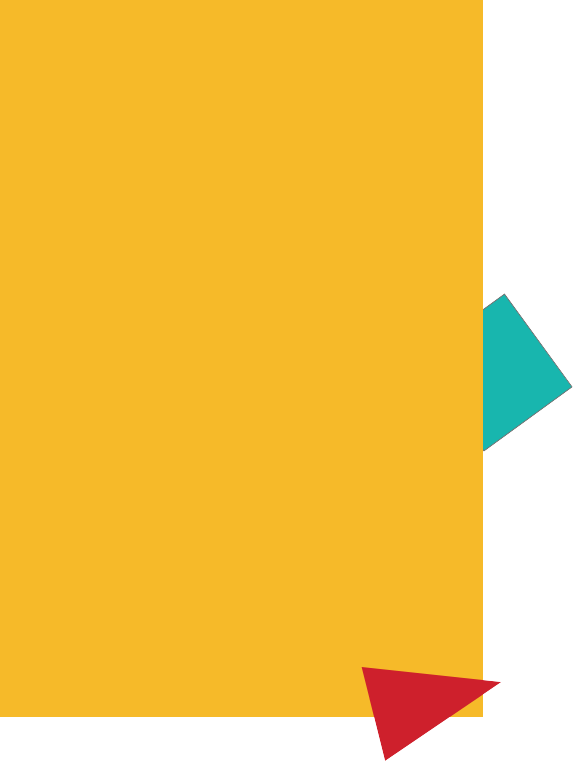 “We had no place to exhibit, so some of us got together, and we decided what we would do was try to get a place. We decided that we needed to get the money to buy the [SSCAC] building, so I and quite a few of the other young artists … we got collection cans.” 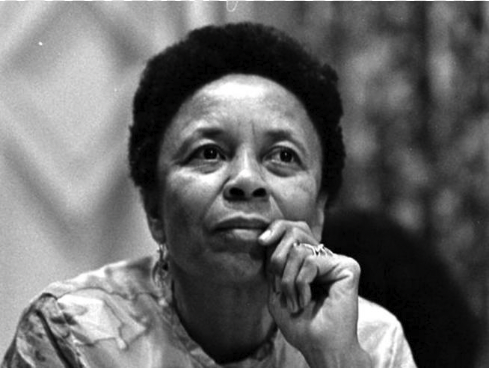 “As stated by Burroughs herself, “A lot of Black museums have opened up, but we’re the only one that grew out of the indigenous Black community. We weren’t started by anybody downtown; we were started by ordinary folks.”

Burroughs studied at the School of the Art Institute of Chicago throughout the 1940s, earning her bachelor of arts and a master of arts in Art Education. She taught for more than 20 years at DuSable High School and for 11 years at Kennedy-King College in Chicago’s Bronzeville community. Burroughs was also awarded an honorary doctorate from SAIC in 1987.

Dr. Margaret T. Burroughs founded the DuSable Museum of African American History and the South Side Community Art Center (alongside other dynamic artists of her time, such as Eldzier Cortor, Charles White, and Elizabeth Catlett, to name a few). In addition to its now 80-year impact, the SSCAC has become a national model for community-based arts organizations. When it was formally established in Bronzeville in 1940, it became the first Black art institution in the United States and has been an important space for the incubation of Chicago’s Black artists. Of more than 100 community art centers established by the Works Progress Administration in the ‘40s, this is the only one that remains open! The establishment of the DuSable Museum of African American History then followed. Originally called the Ebony Museum of Negro History and Art, Margaret and Charles Burroughs started this institution on the ground floor of the Burroughs’ home right on 38th and Michigan — across from the SSCAC!

As stated by Burroughs herself, “A lot of Black museums have opened up, but we’re the only one that grew out of the indigenous Black community. We weren’t started by anybody downtown; we were started by ordinary folks.”

We continue that legacy and community-led determination today and look forward to further expanding on Dr. Burroughs’ legacy and vision. 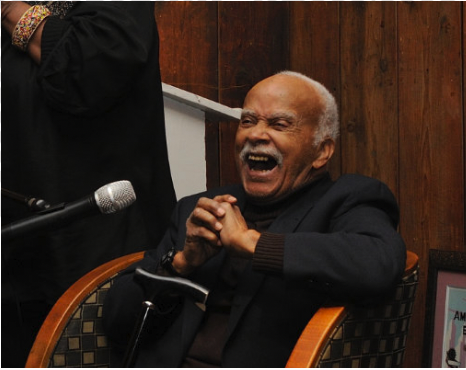 Eldzier Cortor was an African American artist and printmaker. His work typically featured elongated nude figures in intimate settings, influenced by both traditional African art and European art. Cortor is known for his style of realism that makes accurate depictions of poor, Black living conditions look fantastic as he distorts perspective.

As a teenager, he attended Englewood High School, where he met Charles Sebree and Charles White. In 1936, Cortor enrolled at the School of the Art Institute of Chicago. During the 1930s, Cortor found work with the Federal Art Project of the WPA, and in 1941, with funds from the WPA, he co-founded the South Side Community Art Center alongside Dr. Margaret Taylor-Burroughs, Charles White, and Archibald Motley, to name a few. In 1946, Cortor achieved popular recognition when Life magazine published one of his semi-nude female figures. Cortor focused primarily on the Black female figure, stating, ​“the Black woman represents the Black race.”

Funded by a Guggenheim Fellowship in 1949, he traveled to the West Indies to paint in Jamaica and Cuba before settling in Haiti for a few years, during which he taught classes at the Centre d’Art in Port-au-Prince. Various fellowships enabled Cortor to broaden his horizons, initially in Sea Island, Georgia, where he encountered the Gullah, an African American community that had preserved many of their African traditions, and later in Cuba and Jamaica. These travels, as well as his observations of the Black diaspora, influenced much of his work throughout the remainder of his career. 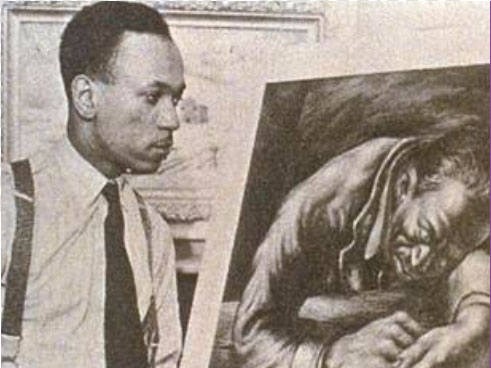 Charles Wilbert White, Jr. was an artist best known for his depictions of Black American subjects in paintings, drawings, lithographs, and murals. Although he was raised in Chicago, he often visited his mother’s family in Mississippi, and he learned about his African American and Southern heritage through these trips, which would later influence his art.

Although White didn’t graduate high school, he later received a full scholarship to attend the School of the Art Institute of Chicago. Some years into his career, in 1938, White was eventually hired by the Illinois Art Project, a state affiliate of the Works Progress Administration. His work received an extended showing at the Chicago Coliseum during the Exhibition of the Art of the American Negro, which was part of the American Negro Exposition commemorating the 75th anniversary of Thirteenth Amendment ending slavery. An important figure in what became known as the Chicago Black Renaissance, White taught art classes at the South Side Community Art Center.

White’s mural, The Contribution of the Negro to American Democracy (1943) at Hampton University, is perhaps his best-known work, depicting famous African Americans across history. He saw art as a vehicle for social activism, once remarking, “Art must be an integral part of the struggle. It can’t simply mirror what’s taking place. It must adapt itself to human needs. It must ally itself with the forces of liberation…”

He went on to teach in New Orleans, where he was briefly married to fellow artist Elizabeth Catlett, and then served in the army in World War II. Later in his life, White moved to Los Angeles, and from 1965 to 1979, he taught at the Otis Art Institute, where his students included Alonzo Davis, David Hammons, and Kerry James Marshall.

White’s legacy lives on today, and he has become one of the most celebrated and influential Black American artists of the 20th Century. 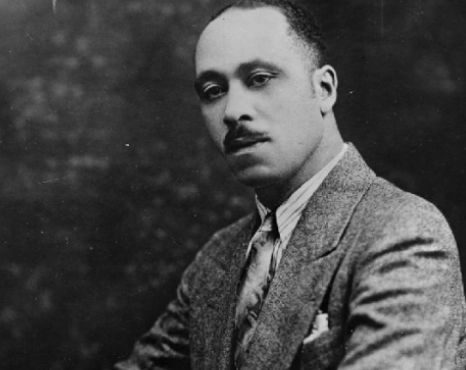 Archibald Motley was an American painter, most notable during the Harlem Renaissance and Black Chicago Renaissance. Motley is most known for his examination of the vibrancy of the Black community, carefully constructing scenes that depicted Chicago’s Black American elites, but also the worlds of the recently disembarked migrants from the South and other characters commonly overlooked.

In 1929, Motley won a Guggenheim Fellowship that funded a year of study in France. His 1929 work Blues, a colorful, rhythm-inflected painting of Jazz Age Paris, has long provided a canonical picture of African American cultural expression during this period. Several other memorable canvases vividly capture the pulse and tempo of “la vie bohème.” Similar in spirit to his Chicago paintings, these Parisian canvases extended the geographical boundaries of the Harlem Renaissance, depicting an African diaspora in Montparnasse’s meandering streets and congested cabarets. Motley  was eventually commissioned by the WPA to create a series of murals in Evanston, Illinois. Similar to other Black artists of that time, he made several visits to Mexico in the 1950s and began painting Mexican life and landscapes.

Ultimately, Motley’s work showcased the diversity of Blackness in a way that would be influential and popularized within the Black arts. 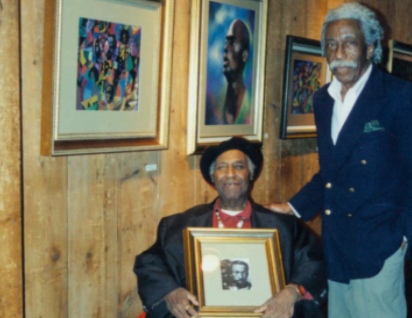 (Pictured, seated, next to Gordon Parks) William Sylvester Carter was a landscape and figurative painter who was born in St. Louis and arrived in Chicago in 1930. Carter received a scholarship to begin his studies at the School of the Art Institute of Chicago and eventually enrolled at the University of Illinois at Urbana-Champaign in 1935. He received both a BA and a BFA there in 1955. He also studied art at the South Side Settlement House (now Ada S. McKinley Community Services). Carter began showing his work in Chicago in the early ‘30s to receive slight  recognition while supporting himself with menial service jobs.

Carter was part of the vibrant creative community at the South Side Community Art Center, and was active in supporting the Artists and Models Balls, for which Carter contributed designs for costumes, decorations, and posters. In 1940, Carter was included in Alain Locke’s book The Negro in Art, a survey of African American artists, and the following year, he was represented in a prolific exhibition of African American art past and present held at the Downtown Gallery in New York. Further recognition followed, despite Carter’s struggles to make art while supporting himself with other work.

The arrival of the WPA soon boosted Carter’s artistic career, although he began there as a laborer. On the Illinois Art and Craft Project, he helped make display dioramas for the new Museum of Science and Industry. He was later hired for the Easel Division of the WPA’s Illinois Art Project, and exhibited at the WPA Gallery on Michigan Avenue. He also showed his work at the commercial Benjamin Gallery, the Hull-House settlement house, and the art show of the 1940 American Negro Exposition at the Chicago Coliseum.

Using watercolor, tempera paint, oils, and ink, Carter explored a variety of styles and subjects that ranged from landscapes, figural images, and abstract composition. Carter also taught at the South Side Community Art Center and served as a substitute teacher in Chicago Public Schools. In his last years, with increasing attention paid to African American art, Carter was featured in several solo and group exhibitions, while continuing to make art on Chicago’s North Side until shortly before his death. 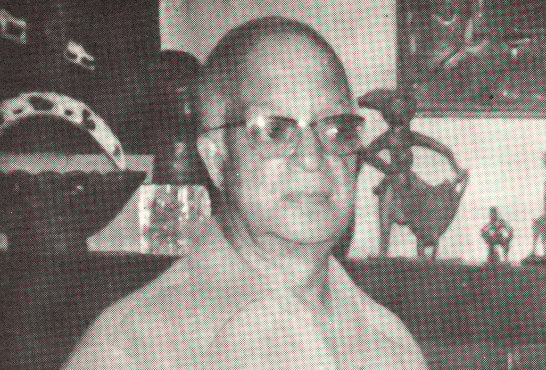 Joseph Kersey was an American painter and sculptor, known for his versatility and range in subject matters not just exclusive to the Black experience. He was educated in the Chicago Public Schools, and later attended the School of the Art Institute of Chicago.

In 1932, Kersey was a founding member of the Arts Craft Guild in Chicago along with such legendary Black artists as Eldzier Cortor, Archibald Motley, Jr., Charles White, William Carter, and Dr. Margaret Taylor-Burroughs. Kersey, along with the others, was instrumental in the establishment of the South Side Community Art Center. His work would later be exhibited with the Federal Arts Project; American Negro Exhibition in Chicago, where he received honorable mention in 1940; Atlanta University; Howard University; the Library of Congress; Anacostia Museum; Atlanta University; and the DuSable Museum of African American History.

Kersey had a distinguished career as an artist and teacher at the University of Chicago Settlement House, Hull House, and the South Side Settlement. 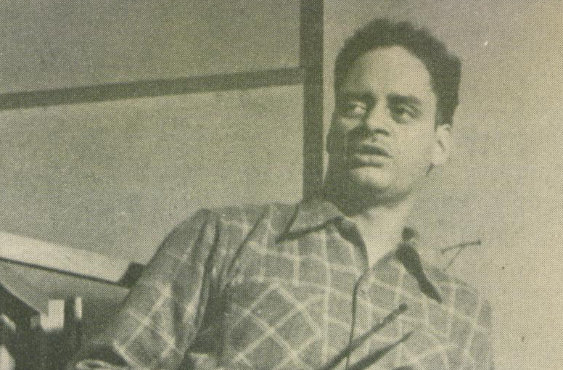 (Pictured) Born in Sedalia, Missouri, Bernard Goss graduated from the University of Iowa in 1935. He soon moved to Chicago, where he studied with George Neal and at the School of the Art Institute of Chicago. During the WPA period, Goss served in the easel division of the Illinois Art Project.

In 1939, he married Margaret Burroughs, and their carriage house was an important meeting place for the group of founding artist members.